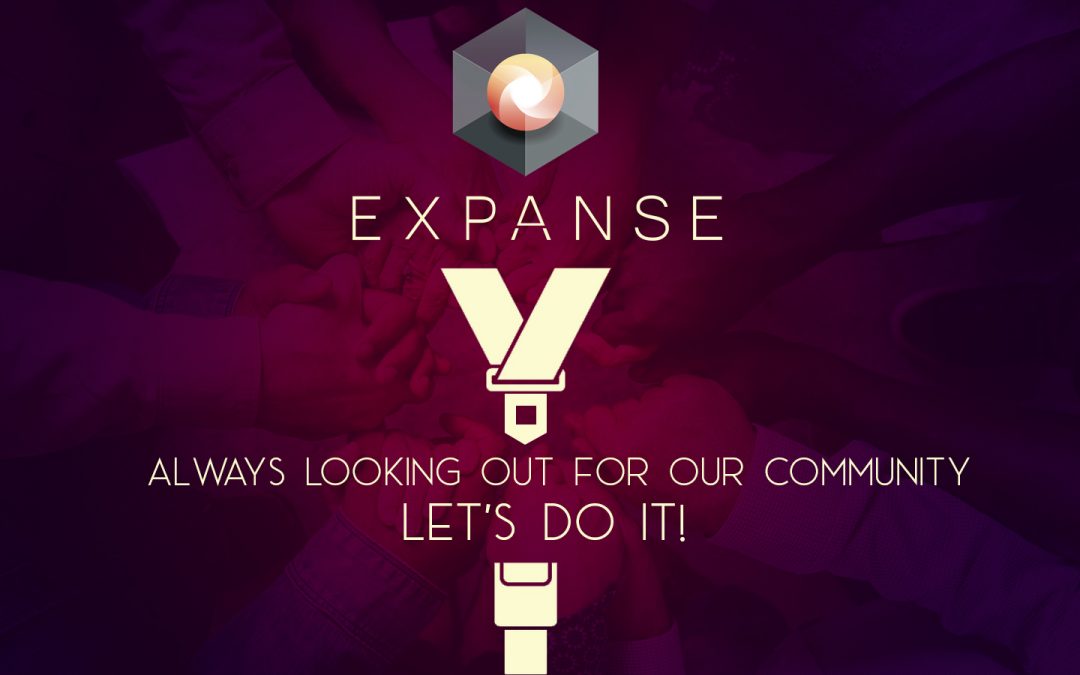 Welcome to the eighteenth edition of the Expanse Newsletter for 2018. This publication is a bi-monthly newsletter issued on the 1st and 15th of each month to share happenings within our community. Here are a few highlights in this edition:

As  some of you may know, Expanse launched a Streamcoins initiative some time ago that was extremely popular. Unfortunately, there was at least one bad actor who plotted to cheat the system and collected coins dishonestly. As a result, we had to stop the program.
Now that the Know Your Customer (KYC) module of Tokenlab is complete, we can launch Streamcoins again. Participants will be forced to complete KYC before receiving their winnings, eliminating the possibility of fraud.
Chris and Asim are busy setting up the process flow, and Chris has challenged us to bring ideas for rich content we can add as it’s developed. Stay tuned for updates!

Behind the Tech with Christopher Franko

Hey guys! This time around we are featuring our CEO and the brains behind Expanse, Christopher Franko, in our Behind the Tech series.
Chris has an A.S. in Computer Science from Beaufort County Community College, Washington, NC. He went on to pursue a higher degree from East Carolina University, but dropped out midway to start his own company.
While in college, Chris was creating mobile apps, freelancing for various companies and writing automation software for affiliate marketing companies. He also used to record rap music under the name JEDISWIFT. Check out one of Chris’ creation here.
Chris is a true-blue millennial who was practically raised on a healthy dose of technology, especially the Internet. He grew up sort of enamored with technology. The family got their first computer when Chris was 10, and by 13 he was learning the Perl programming language. He always felt that technology, especially the Internet, was empowering.
As a millennial programmer, Internet money was a no brainer. One day when Chris was surfing through 4chan, an image-based bulletin board, he saw a thread about Bitcoin. His curiosity piqued, he researched it further, read the whitepaper and was simply blown away by the whole concept.
Talking about his experience starting Expanse, Chris says that at the time he was the lead developer for a cryptocurrency called Franko, and some of the ideas he was coming up with were just too cumbersome to create with the Bitcoin scripting language. He followed Ethereum pretty closely since its inception and felt like it was a better conduit for his ideas. However, he didn’t want to be tied directly to another platform. This led him to co-found Expanse along with James Clayton and Dan Conway.
Chris believes that it’s been an incredibly rewarding journey so far. Early on, the team saw a lot of success. “Now-a-days things are a little tougher, but not just for Expanse. The entire industry is fighting an uphill battle. I think one of the toughest things we have to accept is good things take time. This is especially hard in an unforgiving industry that wants everything now! An industry that only thinks something is good if it pumps the price and disregards all else.”
Christopher has come to realize that it is much better to focus on an exceptional user experience. “For much of Expanse’s life, we have been very good. But people lose interest in, and don’t talk about, something that is ‘very good.’ They want it to be exceptional, and that’s where we are focusing our attention now — on making exceptional software!”
The one thing that excites Chris about Expanse is its incredible community. “Nothing makes me happier than seeing our community grow.” The team has been working on a project called “We are Expanse!” a community outreach program focused on reaching people in their native languages. Our first instance of this is SomosExpanse, and work is on for a similar project for China.
Chris is also pretty excited by the software that we are working on. “We are focused on delivering liberating software products that can truly change the lives of people who use them.”
When asked about his biggest challenges he faces at Expanse, Chris is quick to point to time management. “We are a modestly sized development team competing with platforms with hundreds and sometimes even thousands of developers. So there are constantly new priorities that we have to face.”
He says that there are so many amazing ideas that keep popping on a daily basis and sometimes ranking them by urgency is a task in itself. But he says he is happy sorting ideas on priority and losing some than not having them at all.
Chris is  extremely confident about the future of Expanse. “Ten years from now, Expanse will be a household brand. Millions of people will be using Expanse products and sometimes it will be unbeknownst to them.” He is also profoundly positive about the future of crypto and blockchain. “I predict nation-state cryptocurrencies, and supply chain apps, and governance services — all on the blockchain.”
While being positive about the future, Chris says that the current times worry him a bit. He believes that what we are seeing in the crypto space is an upheaval of sorts. With the ever-changing crypto landscape powered by regulations, legal intricacies, government policies and public perception, he feels that the churning will finally uncover businesses that provide real value to solve global problems. “Times are tough now, but it will turn around,” says Chris, as he signs off.

Get 25% Bonus When You Bet with Expanse on CryptoSportsBet.World

Are you a sports fanatic looking to place a few bets on your favorite teams?  Look no further. CryptoSportsBet.World provides the ultimate Internet sports betting experience — and it accepts over 45 cryptocurrencies, including Expanse. And, players using EXP will receive a 25% deposit bonus, from now through October, 19 2018.
Sense the atmosphere, hear the roar of the crowd, feel the occasion – all from the comfort of your own home. CryptoSportsBet.World brings you the most competitive odds around, so not only will you be having a good time you also stand a great chance of winning some money in the process.
Here’s how the 25% bonus for using Expanse works:

Offering a unique collection of different sports, leagues and hyper competitive live betting, along with the best betting strategies anywhere, CryptoSportsBet.World is unbeatable.

Asim and his team provided the following update:

On VoteLock
“Votelock is a killer app waiting to be unleashed. Getting this mainstream would be a huge accomplishment. With the uncertainty and fraudulent activities that went on with the last election, this could be the cure. Getting the Borderless identity Dapp to work in sync with Votelock  is key. The need for a secure voting system is of the utmost importance right now and states especially are looking for a new uniform way of making voting as streamlined and accurate as possible. I’d be interested in seeing how personal identity information on the block chain would be verifiable without being visible to the public.”
Ethereum  Vs. Expanse
“What about Ethereum and Expanse? The code is the same. You’re going to program the same way, but with Expanse you’ll have a cheaper, faster network and no possibility of high traffic clogging the entire network. Using the most widely-used network doesn’t have benefits other than being easy to code and the market, because in terms of the tech, it’s worst if it’s not scaled enough. it’s not like … ‘i’m going to sell my product on Ebay because it has more traffic and more people will see it’.  You won’t get more visibility for using ethereum.”