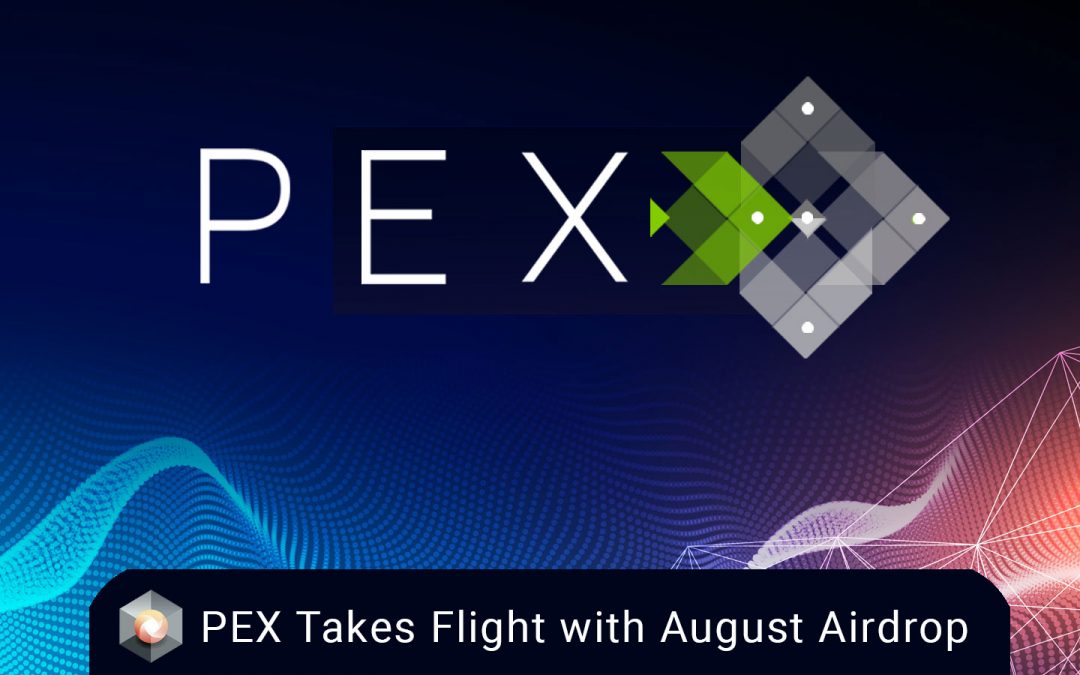 Welcome to the thirteenth edition of the Expanse Newsletter for 2018. This publication is a bi-monthly newsletter issued on the 1st and 15th of each month to share happenings within our community. Here are a few highlights in this edition:

Chief Developer Christopher Franko and Chief Architect Asim Ashfaq have provided the following updates for various initiatives now underway. Read on to learn details about other major Expanse and Tokenlab projects in development.

A timeline for the PEX airdrop is now set. As you know, EXPEX (PEX) is a fork of the decentralized exchange standard (DEX), Ox. The contracts for PEX have been launched and the Expanse decentralized exchange is in development. The new exchange will launch on the Expanse blockchain. We are finalizing the software for PEX airdrops to our Expanse and LAB token-holders, now set to commence on August 31, 2018. Watch for the promotion and build-up to the airdrop over the next six weeks.
We are still looking for Ox developers. To that end, we have added 500M PEX to the EXP.Grant fund that we will use to reward the Ox developers who come on board to work on relays. Send a direct message (DM) to Christopher Franko to apply.

EXP has been upgraded to the latest version of eth. According to Christopher Franko, this upgrade includes a LONG list of updates. Everything from 1.8.12 to 1.7.2 was implemented into EXP. Use this link to learn more:
https://github.com/ethereum/go-ethereum/releases

Our Islamabad team is developing the faucet version of Expanse. This will provide the ability for our community to easily test dApps on the Expanse network. This feature, we believe, will be an excellent addition to the Expanse repertoire and a huge step forward in enhancing the usability of the network .

Thanks to all who provided feedback on the new Gander Explorer during the beta test. The information submitted was very helpful, and we were able to release Gander Explorer V. 1 on July 8. You can access it at  https://gander.tech.
Of note, we are happy to announce that we have established the Expanse node with the DEBUG feature enabled. Through this feature, DEBUG API of the Expanse network is now accessible. This provides the ability to help DEBUG any transaction on the network. This feature is vital in helping dApp developers debug their transactions on the Expanse network and to assist them in rectifying errors or bugs in their code.
We will, of course, show how this feature can be used and accessed so that developers know the status of how their transactions happening on the network. Available in the coming week, statuses shown include:

The Gander is indeed the backbone of the Expanse.Tech™ network. It shows all of the transaction counts and history for a user’s account, as well as details about the miners’ activities on the Expanse network.
Later on, in V. 2, we will display more great information regarding dApps and smart contracts running on the network. The development of the API documentation for Gander.tech is also underway. It will help developers integrate Expanse into their websites, mobile apps and other applications.

As we announced last week, Tokenlab™ (LAB) is now listed on the BOA Exchange: HTTPS://BOAEXCHANGE.COM/MARKET/LAB_BTC. The BOA exchange has just launched, and they were anxious to have Expanse, a token with a three-year history of stability, added to their listings. With LAB, they get a utility token with unlimited growth potential and a well-established, committed team and community behind it.
“BOA is a new exchange, but I’m very familiar with their dev team and trust them. It’s a good opportunity for us to grow together,” said Christopher Franko, Expanse Founder.
As we reported earlier, we have an agreement with the Cryptobridge Exchange to list EXP and LAB this month. We are currently waiting for their listing manager to report back with a firm date. We will announce the date as soon as we know it.
In case you missed it, you can read more about our exchange listing journey in our recent blog, https://expanse.tech/overcoming-the-exchange-listing-challenge-what-we-learned-along-the-way/

As you know, Tokenlab is about to release a series of self-service solutions to support every aspect of the ICO process. A large milestone was recently achieved when the user interface designs were approved. Developers have now started creating the html and css versions of these pages.
From the backend perspective, developers have already developed APIs that will make it all extremely easy and quick to integrate, followed by a beta release. We will provide ongoing updates about the impending beta release in both this newsletter and our Discord channel. Announcements will also appear on the Tokenlab website, https://Tokenlab.io. Watch for the dedicated Tokenlab newsletter coming soon.

After having successfully developed version 1.0 of our Mist wallet, we are now in the process of completely revamping it. Our new wallet is called “Luna.”
Luna provides users the ability to:

We have successfully completed testing on MAC OSX. Currently, we are in the final stages of testing on Windows and Ubuntu. The Luna wallet beta release is set for Wednesday, July 18. Watch for it.

Behind the Tech – Asim Ashfaq

Hello guys! This time around, we are featuring Lead Architect Asim Ashfaq in our Behind the Tech series.
Asim holds a Bachelors Degree in Software Engineering from Riphah International University, a 4-year Bachelors Program. Right from his school days, Asim has always been fascinated with technology and decided to learn it more so than trying to make a career out of it. Not content with simply pursuing his education, he decided to test his knowledge and skills by taking up a part time job during his 3rd semester.
After getting his degree and armed with the rich working experience he got out of more than two years working part time job for an IT company, he went on to become a Full Stack Developer and mastered the craft of working both on the backend and frontend of any technology.
Asim entered the crypto sphere in early 2011. He had read about blockchain technology and its truly transformative capabilities. Amazed by the limitless possibilities this technology can afford to any sector and industry, he decided to learn more about it. Over the last seven years, he has directed his veritable skills and deep technological insights to using blockchain technology to create meaningful applications to solve real world problems.
Asim is lost for words when trying to explain his initial experiences with Expanse. He started working for Expanse as a dApp developer. But Christopher saw the potential in him and offered him the huge responsibility of being the lead architect at Expanse. Asim says that Expanse is the best thing that ever happened to him professionally and this experience is getting better with every passing day. He has immense respect and gratitude for Christopher Franko for having faith in him and allowing him to establish a dedicated team for Expanse. “Christopher gave me, and continues to give me, great growth opportunities as a person and as a professional,” says Asim.
Asim currently works as a lead developer and architect at Expanse and works closely with Chris as the domain expert on the various projects on the Expanse platform. He manages a team of 20 people from his office in Islamabad, Pakistan. From UI to the production release, Asim is responsible for all the tech.
Asim is enthusiastic about the research department that they are in the process of establishing. This department will be tasked with exploring new avenues of applications and infrastructure that can be developed on and for Expanse.
On being asked what excites him about Expanse, Asim can barely curb his excitement. “The dream Christopher and Marcia have for Expanse is difficult to put into words. I share with them the vision and mission of Expanse and I am happy that they have allowed me to be part of this wonderful journey. I see Expanse more as an extended family and a place where the opportunities are boundless. All work here is play and I enjoy every moment of it.”
Asim is very optimistic about the future of blockchain technology in general and Expanse in particular. “From where I stand, I see great potential in Expanse in the coming years as we are working on some great projects which will increase the usability of Expanse among the community and by making Expanse as the most sought after dApp platform in the crypto sphere.”
Asim is still in awe of the decentralized technologies and the infinite possibilities they hold to change the way we live. He says he has a lot to learn and much more to achieve in terms of fully appreciating what could be truly done with this technology. “Every single day is as challenging as it is exhilarating. My hunger to learn more about disruptive technologies is insatiable and this is what drives me to achieve greater things for myself and for Expanse,” says Asim, signing off.

Compelling Quotes from Our Discord Community

Here is a collection of compelling quotes posted over the last two weeks in our various Discord channels:
“The interesting thing about crypto is it can exist in many states at once. It can be a currency, property, a store of value, a remittance vehicle, a network.” From Christopher Franko..
“It is difficult for people to not look at the token dollar price because of the years of brainwashing that governments, banks and media have done to us. Most people who have invested in crypto hope to make some profit and then convert back to fiat so the dollar amount is important. It may take decades to fully live in a digital world, if ever….” From a very active community member.
“BTC and all cryptos are so volatile that it’s impossible to use it as a daily currency. Don’t get me wrong, I can’t wait to see cryptos taking over, but it’s a bit of a utopia to think about using crypto as a currency right now.” From another devoted community member.
“Hyperledger is where I’m putting most of my energy and research currently. There’s no substitute for the speed. No data limit either, but you have to come to a happy medium on that since it is coming from a database.” From a community member.