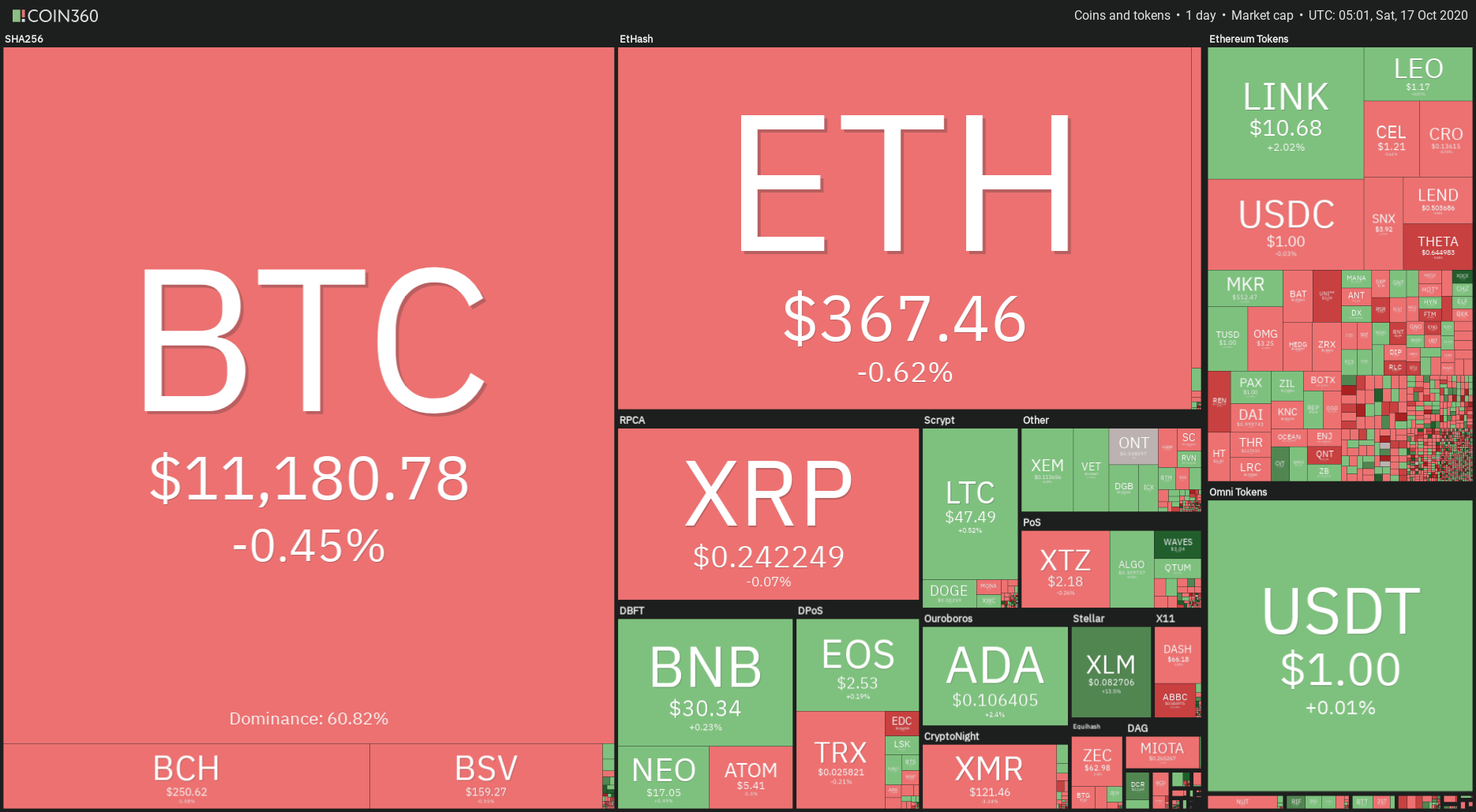 Earlier this week Bitcoin (BTC) price entered a bullish breakout to $11,725 following the previous week’s news that Square purchased $4,709 BTC but since then the price has slumped back into a sideways range.

Several rejections near $11,500 and the recent news of OKEx halting all withdrawals as its CEO ‘cooperates’ with an investigation being carried out by Chinese authorities is also weighing on investor sentiment and Bitcoin price.

The wave of negative news has pulled the majority of altcoin prices back into the red and extinguished the newly found bullish momentum Bitcoin displayed.

According to Cointelegraph Micheal van de Poppe, there is:

“Significant support at $11,000 is now a must-hold level to resume the bullish momentum, which may find difficulty clearing current levels as renewed coronavirus lockdowns are spooking investors.”

Van de Poppe suggests that if Bitcoin loses the $11K support there is a possibility of the price falling below $10K to the 200-MA at $9,750 which is near a CME gap.

Although the current price action is disappointing to bulls who want to see a retest of $12K, taking a bird’s-eye view shows that there are multiple factors playing out in Bitcoin’s favor.

The recent BTC allocations by MicroStrategy, Square and Stone Ridge are positive, especially considering the current economic uncertainties that exist as a result of the COVID-19 pandemic.

Bitcoin has also largely ignored the majority of the negative news over the past two months and held above the $10K level as buyers show consistent interest in purchasing near this level.

It’s also worth noting that only about 1.5 weeks have passed since Bitcoin exited a 24-day long compression phase which was followed by the most recent breakout to $11,750.

For the short term, it seems likely that Bitcoin price will trade in the $11,400-$9,700 area, a range which may turn out to be a swing trader’s paradise.

The views and opinions expressed here are solely those of the author and do not necessarily reflect the views of Cointelegraph. Every investment and trading move involves risk. You should conduct your own research when making a decision.

Bitcoin Price Risks Dropping Below $10,000 if This Support Level Fails

To get ready for block 4,010,000 and the official release of EggSwap Staking, all the contracts on the Chicken UI have been updated. If you have any of your LP currently staked, there will be a backup UI with the old contracts.

We have added Expanse (EXP) on HeroMiners.

The #Defi team just finished the staking test. You'll be able to earn EGGs for staking LP tokens then can stake EGGs to earn a portion of the Exchange swap fees!

Don't store all your eggs in one basket. https://eggs.cool